Graphene oxide (GO) and related materials are widely reported to enhance the photocatalytic activity of zinc oxide. However, the origin of the observed performance improvements remains elusive and studies contributing to a deeper understanding of this critical issue are largely missing. In this work, we have prepared a set of benchmark ZnO-GO hybrid materials in order to systematically put under closer scrutiny the influence of the surface chemistry of GO on the photocatalytic degradation of methylene blue. The set of ZnO-GO hybrids has been synthesized in an ultrasonication process involving ZnO nanoparticles obtained in a microwave synthesis process and GO with three distinct oxidation degrees, employed in three different loading fractions. Structural and physical-chemical characterization by XRD, FTIR, Raman, UV–vis, photoluminescence and spectroscopy and XPS, consistently demonstrate the importance of the surface chemistry of GO for establishing photo-induced charge-transfer interface interactions with ZnO, facilitating the enhancement of the catalytic activity of the ZnO-GO catalyst. Optimized interface interactions thus enabled the design of a ZnO-GO catalyst exhibiting a conversion rate of 80% obtained in a time of 70 min and at a catalyst concentration of only 0.045 mg/mL.

The transfer of nanoscale properties from single‐walled carbon nanotubes (SWCNTs) to macroscopic systems is a topic of intense research. In particular, inorganic composites of SWCNTs and metal oxide semiconductors are being investigated for applications in electronics, energy devices, photocatalysis, and electroanalysis. In this work, a commercial SWCNT material is separated into fractions containing different conformations. The liquid fractions show clear variations in their optical absorbance spectra, indicating differences in the metallic/semiconducting character and the diameter of the SWCNTs. Also, changes in the surface chemistry and the electrical resistance are evidenced in SWCNT solid films. The starting SWCNT sample and the fractions as well are used to prepare hybrid electrodes with titanium dioxide (SWCNT/TiO2). Raman spectroscopy reflects the optoelectronic properties of SWCNTs in the SWCNT/TiO2electrodes, while the electrochemical behavior is studied by cyclic voltammetry. A selective development of charge transfer characteristics and double‐layer behavior is achieved through the suitable choice of SWCNT fractions.

We present a general procedure for the synthesis and in situ functionalization of highly fluorescent non-conjugated polymer dots, by exploiting the room-temperature carbodiimide-mediated condensation between citric acid and amines. The versatility of this method is proved by the preparation and characterization of a broad set of fluorescent nanoparticles with customized polymer structures and functional groups.

Nanocellulose is increasingly being investigated as a paradigm of a sustainable nanomaterial because of its extraordinary physical and chemical properties, together with its renewable nature and worldwide abundance. The rich structural diversity of cellulose materials is represented by different crystalline allomorphs, from which types I and II stand out. While type I is naturally and ubiquitously present, type II is man-made and requires harsh and caustic synthesis conditions such as the so-called mercerization process. Here, we provide an optimal scenario to obtain either type-I or II nanocrystalline cellulose (NCC) by a mercerization-free method consisting only of the acid hydrolysis commonly used to produce nanocellulose from microcellulose. The possibility of having nonmercerized type-II NCC acquires a great relevance since this nanostructure shows particularly appealing properties. Moreover, an entangled and wrapped system arises when used as a dispersing agent for single-walled carbon nanotubes (SWCNTs), significantly different from that of type I. The biological testing of each NCC type and their respective SWCNT–NCC dispersions in human intestinal (Caco-2) cells reveals a general innocuous behavior in both cancer and normal stages of differentiation; however, the type-II-based SWCNT–NCC dispersions display cytotoxicity for cancer cells while enhancing mitochondrial metabolism of normal cells.

The emission of a bright blue fluorescence is a unique feature common to the vast variety of polymer carbon dots (CDs) prepared from carboxylic acid and amine precursors. However, the difficulty to assign a precise chemical structure to this class of CDs yet hampers the comprehension of their underlying luminescence principle. In this work, we show that highly blue fluorescent model types of CDs can be prepared from citric acid and ethylenediamine through low temperature synthesis routes. Facilitating controlled polycondensation processes, the CDs reveal sizes of 1 – 1.5 nm formed by a compact network of short polyamide chains of about ten monomer units. Density functional theory calculations of these model CDs uncover the existence of spatially separated highest occupied molecular orbital and lowest unoccupied molecular orbital located at the amide and carboxylic groups, respectively. Photoinduced … 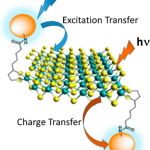 Exfoliated semiconducting MoS2 and WS2 were covalently functionalized with 1,2-dithiolane-modified carbon nanodots (CNDs). The newly synthesized CND-MoS2 and CND-WS2 hybrids were characterized by spectroscopic, thermal and elec-tron microscopy imaging methods. Based on electronic absorption and fluorescence emission spectroscopy, modulation of the optoelectronic properties of TMDs by interfacing with CNDs was accomplished. Electrochemical studies revealed facile oxidation of MoS2 over WS2 in the examined hybrids, suggesting it to be better electron donor. Excited state events, inves-tigated by femtosecond transient absorption spectroscopic studies, revealed ultrafast energy transfer from photoexcited CNDs to both MoS2 and WS2. Interestingly, upon MoS2 photoexcitation charge transfer from an exciton dissociation path of MoS2 to CNDs, within CND-MoS2, was observed. However, such …

Reduced graphene oxide (rGO) is widely seen as the most promising route for the low-cost mass production of graphene for many applications ranging from ultrathin electrodes to structural nanocomposites. The Hummers and Marcano methods are the two most successful approaches for producing high-performance rGO, but have been criticized for producing toxic emissions. We have applied life cycle assessment methodology to evaluate the environmental impacts of both production routes for GO and rGO in the context of applications requiring bulk materials or thin coatings. We find no current obstacle to the industrial scale production of graphene arising from its environmental impact. The cumulative energy demand is found to have a cap value between 20.7 and 68.5 GJ/Kg, a relatively high value; impact in other categories (such as human toxicity or resource depletion) is lower, and materials inventory …